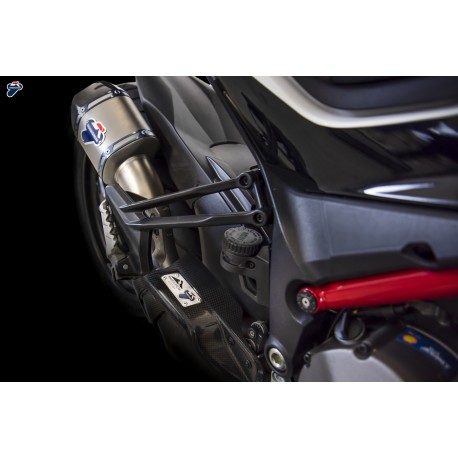 Slip on exhaust Termignoni D193 "PIKES PEAK EDITION" for Ducati  Multistrada all models and years. This reference D19308040ITC is  homologated for all models of Ducati Multistrada 1200 and 1260.

ON STOCK - SHIPPING AFTER 2/3 WORKING DAYS

The exhaust system Termignoni homologated (Euro 4) D193 (complete reference D19308040ITC) stands out for the compactness of its silencer complete with titanium sle­eve and carbon fibre endcap. The 70 mm link pipe and carbon fibre heat shield are finished with a titanium plate engraved with the Termigno­ni logo and the iconic “Pikes Peak Edition”.

This system is compatible with the original side suitcases and does not require any re-mapping of the ECU.

The D19308040ITC slip on system is suitable to the bikes from the following list :

30 other products in the same category: